First off, here are the previous posts in my Bayesian sampling series:

In the first post, I illustrated Gibbs Sampling – an algorithm for getting draws from a posterior when conditional posteriors are known. In the second post, I showed that if we can vectorize, then drawing a whole “block” per iteration will increase the speed of the sampler.

For many models, like logistics models, there are no conjugate priors – so Gibbs is not applicable. And as we saw in the first post, the brute force grid method is much too slow to scale to real-world settings.

This post shows how we can use Metropolis-Hastings (MH) to sample from non-conjugate conditional posteriors within each blocked Gibbs iteration – a much better alternative than the grid method.

I’ll illustrate the algorithm, give some R code results (all code posted on my GitHub), and then profile the R code to identify the bottlenecks in the MH algorithm.

patients. There is one binary outcome,

, and one confounder, age. Age is a categorical variable with 3 levels. I control for it using 2 dummies (with one category as reference). I model this with a bayesian logistic regression:

to denote the 4×1 parameter vector. I also place an inverse gamma prior on

with known hyper-parameters. This is a fairly realistic motivating example for the Metropolis-in-Gibbs:

Let’s look at the (unnormalized) conditional posteriors of this model. I won’t go through the derivation, but it follows the same procedure used in my previous posts.

Recall we are modeling

row of the model matrix,

There is no conjugacy here! This conditional distribution is not a known distribution so we can’t simply sample from it using Gibbs. Rather, within each gibbs iteration we need another sampling step to draw from this conditional posterior. This second sampler will be the MH sampler. If you need a refresher on Gibbs, see the previous posts linked above.

Side note: the conditional posterior of

is conjugate. So within each Gibbs iteration we can use a standard function to sample from the inverse gamma. No need for a second sampling step here. Phew!

The goal is to sample from

. Note this is a 4-dimensional density. For simplicity of explanation, assume we only have one

and that it’s conditional density is unimodal. The MH sampler works as follow:

So, proposals that yield a higher conditional posterior evaluation are always accepted. However, proposals with lower density evaluations are only sometimes accepted – the lower the relative density evaluation of the proposal, the lower the probability of its acceptance (intuitive!). Over many iterations, draws from the posterior’s high density areas are accepted and the sequence of accepted proposals “climbs” to the high density area. Once the sequence arrives in this high-density area, it tends to remain there. So, in many ways you can view MH as a stochastic “hill-climbing” algorithm. My CompSci friend tells me it is also similar to something called simulated annealing.

The notation extends easily to our 4-dimensional example: the proposal distribution is now a 4-dimensional multivariate Gaussian. Instead of a scalar variance parameter

, we have a covariance matrix. Our proposal is therefore a vector of coefficients. In this sense, we are running a blocked Gibbs – using MH to draw a whole block of coefficients per iteration.

All (commented!) code producing these results is available on my Github. So here are the MCMC chains of our 4 parameters of interest. The red lines indicate true values. 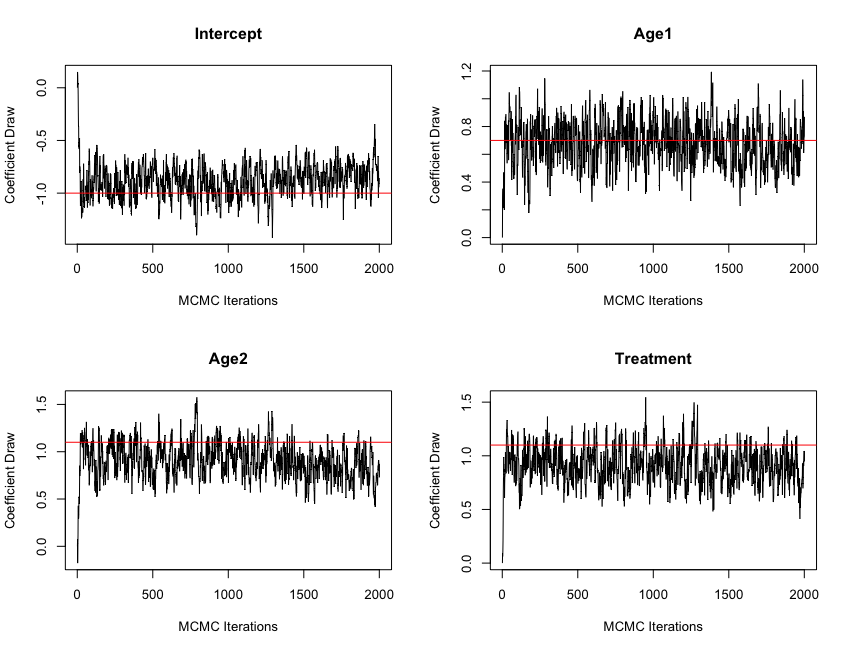 There’s some room for improvement:

The nice thing about about the Bayesian paradigm is that all inference is done using the posterior distribution. The coefficient estimates now are on the log scale, but if we wanted odds ratios, we just exponentiate the posterior draws. If we want an interval estimate of the odds ratio, then we could just grab the 2.5 and 97.5 percentiles of the exponentiated posterior draws. It’s as simple as that – no delta-method junk.

I mentioned before that MH is costly because the log posterior must be evaluated twice per Gibbs iteration. Below is a profile analysis using the R package profviz showing this. The for-loop runs a Gibbs iteration. Within each Gibbs iteration, I call the function rcond_post_beta_mh() which uses MH to produce a draw from the conditional posterior of the parameter vector. Notice that it takes up the bulk of the runtime.

Diving into the rcond_post_beta_mh(), we see that the subroutine log_cond_post_beta() is the bottleneck in the MH run. This function is the log conditional posterior density of the beta vector, which is evaluated twice.

That’s all for now. Feel free to leave comments if you see errors (I type these up fairly quickly so I apologize in advance).

I may do another post diving deeper into Hamiltonian Monte Carlo, which I alluded to earlier in this post. More likely, this will be my last post on sampling methods. I’d like to move on to some Bayesian nonparametrics in the future.